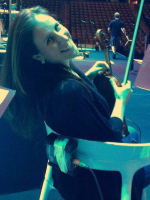 Dana has been playing the violin for 30 years, beginning her musical studies at age seven with the piano, and discovering the violin at age nine. She attended the University of Florida on a music scholarship and began playing viola as a secondary instrument while at the University, becoming the Principal Viola of the University Orchestra her junior year. Dana graduated in 1997 with a Bachelor of Music in Music Education and a Certificate in Violin Performance.

Upon graduation, Dana moved to the Melbourne area and established a private studio, where she has sent several students off to college with music scholarships. Dana performs with the Brevard Symphony Orchestra, and has performed with the Orlando Philharmonic Orchestra and other groups in the Central Florida area.  In addition to pursuing her Masters in Violin Performance at UCF, Dana is an adjunct professor of chamber music and violin/viola at Florida Tech. She is also a touring professional, playing backup for many acts such as Bebe Neuwirth, Bernadette Peters, Rod Stewart, and Sting, among many others.

IfSpace is Brevard's only university-style hybrid homeschool center, featuring enriching courses and activities across the curriculum. Join our community!

Keep up to date with our latest news and events